HOMES: Cheltenham, England until 1870; immigrated to US in 1871 and moved to Fairmont, Nebraska as founders of the town; Newton, Massachusetts; Denver, Colorado; Evanston, Illinois; Los Angeles, California.

BIOGRAPHICAL DATA: Clara was born on Christmas Day in 1852, hence her middle name Christiana, at Cauldwell Farm, Newland, Goucestershire, England.  She attended Clifton Ladies College in England and passed the Cambridge Examination before immigrating to America with her whole parents and siblings.  It is family legend that they decided to leave England because Jane Blagdon, her mother, was a member of the aristocracy and married “beneath” her. I believe part of the reason is religious, as well.  Jane’s father was the Esquire John Blagdon of Boddington Manor in Cheltenham. The class system was formidable in those days and Thomas Morgan was a simple farmer from Newland.  I went to Cauldwell Farm in 1995 and it still stands as a working farm. The Morgan Family sailed from Liverpool in 1871 and arrived in New York on the ship Denmark on July 31. They immediately went overland in a covered wagon to homestead in Fairmont, Nebraska. Clara’s father died shortly after they arrived in Fairmont and is buried there. She and Clarence Chapin were the first recorded marriage in the new town of Fairmont. Before even having children, she was elected first Director of Fairmont School Board and taught at the first school house. She became very active in the Women’s Suffrage Association of Nebraska and was elected an officer in 1880.  She was also active in the Women’s Christian Temperance Union and became editor of its international magazine, The Union Signal.  She also wrote many articles for the publication.  Clara and Clarence Chapin were quite a pair of tough idealists.  They both wrote many articles and she was his editor.  They lived in New Mexico and Colorado for a while, but he was cheated out of his share of the Cripple Creek Gold Mine and lost his fortune.  In fact, Clarence was one of the first members of the Nebraska state legislature in 1883.  She was a very spiritual and Christian woman.  Although quite small in stature, she was described as mighty and strong in mind and determination.  She had a substantial influence on all her children and grand children and was deeply revered and loved as “Mom Chape.” We are lucky enough to have some of her writings, which are a perfect example of what was important to her at that time in American history. It is her life that I fictionalized in my children’s book, “The Silver Box.”
From: A woman of the century: fourteen hundred-seventy biographical Sketches, Vol. 3, 1893

CHAPIN, Mrs. Clara Christiana, woman suffragist and temperance worker, born in Gloucestershire, England, 25th December, 1852. Her maiden name was Morgan. Her father was of Welsh extraction, and her mother came of an old country family the Blagdons, proprietors of the manor of Boddington since the days of William the Conqueror. She was educated in Clifton Ladies’ College and passed the Cambridge local examination the only form of university privilege open at that time to girls. She came to the United States with her parents and their five younger children in 1870. The family settled in Fillmore county, Nebraska, and Clara engaged in teaching. In September, and at the age of ten years she was not bound down by any weight or handicapped by wealth which might have prevented the development of the resources within herself. From that age she was self-supporting. The industrious spirit, perseverance, strong judgment, sympathy and kindness possessed by both parents were transmitted to her. Her education was obtained in the public schools and in the State Normal, supplemented by studies at night. She taught school twelve years and was recognized as an efficient instructor. Beginning when “boarding round ” was the custom and five dollars per month was the salary, she gradually advanced to schools where higher attainments insured greater compensation. She studied medicine in the Homeopathic College of Cleveland, Ohio. She was graduated in February 1874 and located at once in Pittsburgh, PA , where she still resides. She found it a conservative city, unaccustomed to woman doctors and not realizing a demand for them. It required a great struggle to become established. The pioneer efforts and all influence connected therewith were borne as a necessary ordeal to one entering upon an unusual work. She labored with a firm determination to maintain true professional dignity and general courtesy to all deserving associates, cognizant of the fact that hard study and patient perseverance would be necessary to reach the goal. Her true womanly character in the profession has been endorsed by many exalted positions in local, district, State and national medical organizations. Her faith in God and in the brotherhood of mankind has induced her to make extensive efforts for humanity, for the relief of their physical distress and for their education and reformation. Mr. Chapin served as a member of the State legislature, while his talented wife by the use of her pen and personal influence aided in securing the enactment of the famous Slocum license Taw, at that time supposed to be the panacea in temperance matters. They also aided materially in securing the temperance educational and scientific law for that State. She was particularly interested in all movements for the advancement of women and took an active part in the woman suffrage campaign of 1882. She was a prominent member of the Woman’s Christian Temperance Union and wrote much for the press on the woman and temperance questions. Being a little body, Mrs. Chapin commonly went by the name “La Petite” among her co-workers in Nebraska, but, though small of stature, she is of that fine mental acumen which gives great individuality and force of character. Though of English birth, Mrs. Chapin’s life-work has been and still is American. She now resides, with her husband, son and two daughters, in one of the pleasant suburban towns Chicago. lll. 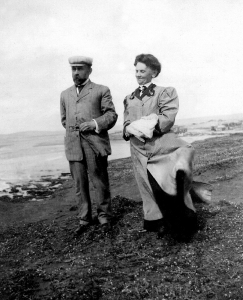 The following are articles written by Clarence Calvin Chapin, Clara’s husband, with her always serving as editor and “scribe”. The articles are very interesting, even in these times and a statement of historical times and my ancestor’s opinions. They were not short of those certainly: