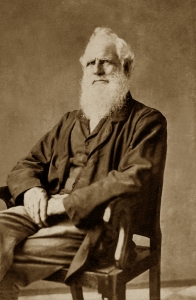 BIOGRAPHICAL DATA: Nathaniel Webber was born March 29, 1795 in Beverly, Essex County, Massachusetts to Elizabeth “Betsey” Standley and Samuel Webber.  His siblings were: Samuel, Benjamin, Sally, Henry, and Polly Webber, all born in Beverly, MA, according to the town records. His ancestors were some of the founding families of Beverly.

The Webbers were seafaring people, which is natural for families living on the coast of New England, especially one that has a working harbor as does Beverly.  Many cousins and brothers also signed on as sailors. It is family legend that he became an orphan as a boy and was forced to live with relatives.  His older brothers were all at sea and could not care for him.  According to descendant Alice Chamberlin, he went to sea as a stowaway on a ship from Salem, Massachusetts at the age of 9. His Seaman’s Protection Certificate was issued in 1810 at the age of 15. He was a young sailor in the War of 1812 serving on the privateer Favorite. He became captain of his first vessel in his 20’s. There are over 20 ships on which he is documented to have served in some capacity from 1810 until the year before his death in 1866. His most famous ship was the Trade Wind, an extreme clipper designed by Jacob Bell out of the port of New York, which made a record voyage around the horn in 103 days from New York to San Francisco. During his career, four of his ships sank, but he survived every one of the disasters, despite not knowing how to swim.

He met his wife Frances Mayer in England and married her at a church on the Thames in 1824. His wife and children accompanied him on several of his voyages and his son JJN Webber was purportedly one of the first white children to step foot in China. He sailed into just about every port of the world in his long career, being gone years sometimes. He had his portrait taken on his last voyage on the Silas Greenman in Hong Kong, which I have on my bedroom shelf.

He was a religious man and was known to conduct services for the passengers and crew every week.  He was respected by his crews and loved by his family. This was written in 1852 by one of his missionary passengers: “Captain Webber is a noble Christian, and the most exemplary man I ever knew.  At his own request we have morning and evening devotions on deck, at which the officers not on duty, and many of the sailors are present.” It is known that Nathaniel Webber kept a journal and several passages from it were published in the early 1900’s in “Outing” magazine. He was a literate man and his writings are fascinating reading for anyone interested in life at sea during the 19th century.

Nathaniel Webber died May 27, 1867 in Brooklyn and his wife Frances was living with their daughter Frances and grandchildren Nathaniel, John, Sarah, Sturges and Jennie Sammis (children of daughter Frances S. and ex-husband Oliver K. Sammis) in Indiana in 1870, while their son Edward, who was a policeman, was living in Brooklyn with his brother JJN Webber, wife Nancy, and children Benjamin, Emma, Albert, Edward and Ada. Their daughter Jeannie, my ancestor, married her sister’s ex-husband, Dr. O.K. Sammis, and went on to have 9 more children by him in New York. Captain Webber’s opinion about this circumstance is not recorded, except in his actions as a witness in his daughter Frances’ lawsuit supporting her divorce from Dr. Sammis in 1852. Captain Webber is buried in the Evergreens Cemetery in Brooklyn, New York. His wife died in 1883 and is buried with her daughter and grandchildren in Indiana. 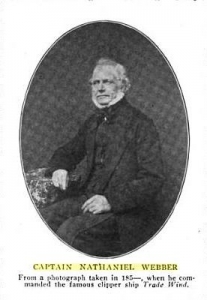 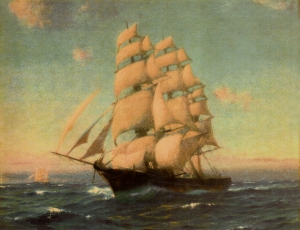