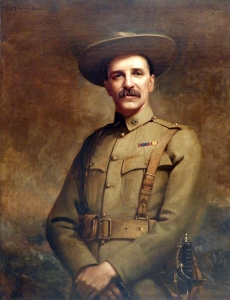 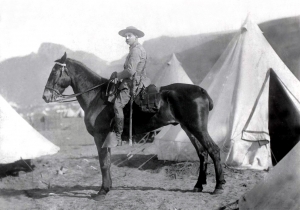 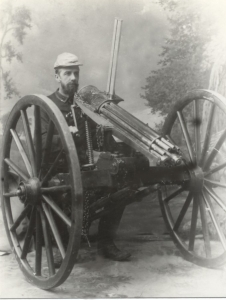 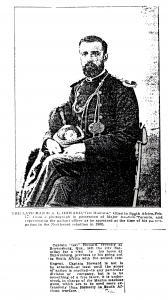 HOMES: Hinsdale and Winchester, New Hampshire and Chicopee, Massachusetts as a child; New Haven, Connecticut (many residences throughout the years); Brownsburg, Quebec, Canada; all over the world fighting the war of the moment, in an effort to market his Gatling gun and munitions.

BIOGRAPHICAL DATA: A.L. Howard’s 1867 enlistment document shows his place of birth as Hinsdale, New Hampshire, although they have no record of his birth there.  He was raised in Connecticut, Massachusetts and New Hampshire, his mother’s family the Fullers being from Lowell, Massachusetts. This side of his family goes back to the Mayflower, our ancestor being Samuel Fuller. His brothers were Oscar and Albert and he had a sister named Estelle.  He went to the Chicopee Grammar School in Massachusetts in 1860 and was listed as 15th in his class.  He was a member of the National Guard in Connecticut where he gained his first military experience, although it is reported that he enlisted while underage during the Civil War.  He is registered as Private 2nd Company in 1880-1884 and then as a 2nd Lieutenant commanding 2nd MG Platoon in 1884.  It also lists him as a Sergeant in the U.S. Cavalry in 1866, being discharged in 1871.  He was a soldier of fortune most of his life, fighting in the wars of the age to help demonstrate and market the Gatling gun and munitions.  He reportedly fought for five years as a young man putting down Indian insurrections in America.  He is known as “Gat” Howard, not because he invented the gun but because he improved it, increasing its power immensely.  He apparently knew it better than Mr. Gatling himself, with whom he had an ongoing relationship.

He is listed as a machinist at The Winchester Repeating Arms Company at 42 Munsen Street in New Haven, Connecticut in 1876.  In 1877 he left the company where he was a foreman to establish a small shop of his own adjoining his house at 58 Brewster Street in New Haven.  He made shot shells and other ammunition (known as the Standard, Keystone, New York Club and ALH shot shells), marketing them to such firms as Keystone Ammunition of Philadelphia and U.S. Cartridge Company in Lowell, Massachusetts until 1881.  His plant was completely destroyed by fire in that year and he then joined the U.S. Cartridge Company in Lowell, Massachusetts assuming charge of their shot shell department.  After he joined U.S. Cartridge, they patented the famous Black Climax cartridge which won the National Trap Shoot in 1884 and in 1917.  He was still a member of the National Guard of Connecticut and his first 5 children were born in New Haven during this time.  In 1883, 1884 and 1885 he is listed at 58 Shelton Street in New Haven and began his own company again with partner G.P. Salisbury named A.L. Howard & Company.  In 1885, he went to Canada as a salesman/demonstrator for Gatling guns and fought in the famous Battle of Batoche Ferry (assisting General Middleton), being instrumental in the victory against Louis Riel, the renegade Indian leader of the Northwest Rebellion.  This was his first exposure to Canada and as a result of his experiences, he decided the market for his munitions was wide open there.  This resulted in his lifelong association with Quebec.

In 1886, he lobbied the Dominion government to make his ammunitions in Canada which led to the formation of the Dominion Cartridge Company and the construction of a factory and plant in Brownsburg, Canada.  This company eventually became CIL, a division of which still exists and employs people in this town. Brownsburg became his home and he built a large estate, completed in 1898, in the town.  It is mentioned in an obscure article that his wife, Sarah Newgeon Howard, did not follow him to Brownsburg, however, and they were divorced. His subsequent marriage to a farmer’s daughter from Brownsburg named Margaret Green occurred in 1895.  She and his child died in childbirth in 1897 in Canada.  He also opened a plant in Capelton to produce fulminate of mercury in 1892 and gave the running of it to his son George Howard in 1897.

News of the Boer War in South Africa naturally sparked his interest as a possible location to demonstrate his war machines and he enlisted on December 29, 1899 as a Lieutenant of the Canadian Mounted Rifles, for duty with a machine gun detachment.  A harrowing trip over with his two horses on the transport ship Laurentian was documented in the newspaper.  His detachment became known affectionately as “Howard’s Scouts,” being attached to the British Army.  Word of his death in battle came on February 17, 1901 at the age of 57, after nearly a year in South Africa.  Lord Kitchener wrote a two page commendation, describing Gat Howard as a “gallant and enterprising officer.”  One of the men who fought next to him wrote that he was “afraid of nothing, taking delight in facing bullets.”  He evidently always rode a white horse, audaciously attracting attention from the enemy. There is a beautiful oil portrait of him which hangs in the Canadian War Museum in Ottawa.

A.L. Howard is variously described as stern, courageous, hard-driving, but kind and generous as well as having a sense of humor. He certainly always made an impression on the people with whom he came in contact. I went to Brownsburg and met a group of descendants of the employees of CIL and he is legendary still in that town. He has attained a rather legendary status in Quebec, Canada and to his descendants, as well.  Leonard Wilson, who worked at the plant in Brownsburg for 50 years, remembers him as a “man who got things done.”  Sarah, his daughter, described him as a kind man who took good care of his children and helped people out when in need, sometimes paying their taxes or food bills.  There are many letters that he wrote home to his children from South Africa that display his affection for them.  He was away much of the time, however, on his mercenary exploits, which might explain his wife’s estrangement from him.  There is a reference in one of his letters home, telling his son George to castigate his brother Nelson, my great grandfather, for not writing to him. It was obviously a complicated relationship, as he named his first son Arthur, after his father.

He is buried in Rustplaate, Transvaal, South Africa and his tombstone reads “In Memory of Major A.L. Howard, Howard’s Scouts, Killed in Action, 7th February 1901.”