HOMES: New York City (from birth until marriage in 1905); Watertown, Connecticut for the rest of her life

BIOGRAPHICAL DATA: Growing up, her closest friend was her sister Harriet.  They both had to suffer the social stigma and humiliation of a divorce when their parents split up in their teens.  She and her sister were shuffled off to boarding schools and relatives in Watertown after the divorce and she relied on the generosity of those relatives while growing up, although she remained close to her father.  The Charles Jacksons were kind people and they were largely responsible for their care for many years.  They gave her a large party to celebrate her engagement to Charles Buckingham and hosted her wedding reception.  It was a very large wedding and one the town did not soon forget.  Many people came in from neighboring counties and New York City to attend.  The group wedding photo is beautiful.  Her father gave her away but her mother was not in good graces with her daughters at the time and did not attend.  She began her married life in Watertown with the gift from her father of the Trumbull House on DeForest St., built in 1772, in which she lived most of her life.  It served as the center of activity for many people in town for decades. It was a happy home filled with people at all times, as described by her children.

Agnes Buckingham was a very active woman, volunteering with various organizations all her life.  She was a member of the American Red Cross and the Nurses Association, doing a great deal of work during the wars.  She was always an active member of her church, heading up the Altar Guild of Christ Church (where she was married) for many years.  She was also a member of the National Society of Colonial Dames of American, the Sarah Whitman Trumbull chapter of the DAR, the Connecticut Historical Society, the Watertown Foundation and Historical Society of Republican Women.  There are handwritten copies of letters between her and the author of the Curtis/Curtiss Book of Genealogy, demonstrating that she was a well respected source of data for the genealogical societies.  It is her work that I have relied on for most genealogical information on the Buckingham and Curtiss sides of the family.  Unfortunately, she concentrated mostly on her own family, and the Buckingham portion lacks the impressive research done on the Curtiss and Murray sides.

I met her several times in my life, the first of which I will never forget (she did not like to fly, so came out to California by train only a few times).  I was about twelve years old and my parents, Joan and Lee Sammis, and sister, Diana met her for lunch at an inn that she had frequented for fifty years.  They all knew her and she obviously appreciated the attentive care given her by the employees.  I remember my mother warning us to be on our best behavior as she was a woman who demanded respect and the utmost in etiquette.  Diana and I were very nervous by the time we actually met her.  I think she was about 90 years old then and was quite hard of hearing so it was a very loud lunch.  But I will never forget her regal stance and bearing.  She stood so straight and you could just see the stubbornness for which she was so well known.  She was very happy to meet us and was very loving.  There is a picture of that day.  I also met her when she was dying in 1977 when I was at college back East.  Nanny and Papa (Betty and Nelson Howard) took me to see her at the convalescent home in Waterbury.  She did not seem to know any of us, but had moments of lucidity, very much like her daughter Betty today, who is alive at 106 years old.  I was quite amazed at her dignity, even on her death bed.  I thought she was really beautiful.  She sat straight up in bed and insisted that her hair and makeup be done every day.  I held her hand for a long time and we talked to her about the past, which she seemed to recall like it was yesterday.  Of course, she couldn’t remember today, but her recollections were astounding about 1920 and 1930.

I have heard stories about her all my life and I will tell a few here.  Family dinners, especially Thanksgiving and Christmas, were bountiful and after dinner, it was the custom that all the children had to run all the way around the house to work up an appetite for dessert.  My grandmother, Betty Buckingham Howard, took my mother, Joan and her sister, Natalie to live in the big white house in Watertown while my grandfather was in the Navy during World War II.  My mother remembers the playhouse in the back yard that was built for her cousin, Patty Goss.  My grandmother has told me many times about the fire house being behind their house and how when the fire bell rang, Granny B and Grandfather Buckingham would run and gather up the horses to take the fire wagon to the fire.  The jail was also right behind their house and my grandmother remembers Granny B feeding the drunks in the jail, and the children would taunt them unmercifully.  My father also had the “pleasure” of taking a drive with her (she was still driving at 75 years old) through the winding roads of Watertown while he was in the Army, an experience he says he will never forget.

She was considered the grand dame of Watertown, rivaling the reputation of her mother-in-law, Annie McLean Buckingham, in the small town.  She was a very strong woman of unyielding convictions and some say she wore the pants in the family.  She was very organized and the children all led a very ordered but fun life.  Their father was the comic in the family who brought gaiety into the house.  The town was the epitome of New England village life and everyone knew everyone. My grandfather describes her as the most generous, loving woman he has ever known.  He always considered her a second mother in his days away from home at Taft School.  She would often host many of the homesick boys from Taft at her home.  This is how my grandparents met. She was an energetic woman and had a profound impact on her progeny! Check out the link below to learn about the house she was given as a wedding present by her father. 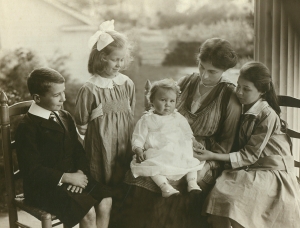